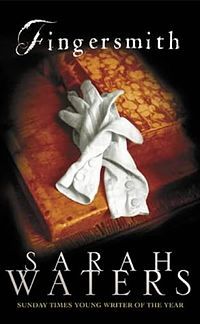 Susan Trinder is a 17-year-old orphan who lives in Victorian London with Mrs Sucksby, her guardian,baby-farmer and home to petty thieves and criminals. The Lant street house homes several characters such as Dainty, John Vroom and Mr Ibbs who buys stolen goods to sell on for a profit and conducts some dodgy dealings.

Maud Lilley, also seventeen and an orphan lives with her uncle at Briar house, 40 miles from the London Burrough.To Christopher Lilley, Maud is merely his secretary and reader due to his failing eye-sight. He keeps her like a prisoner and she is not allowed  to venture beyond the grounds.The only company she has are the households servants, and the Gentlemen that visits her uncle to discuss his growing library.

One day a con man known as ‘Gentleman’ arrives at Lant street, convincing Susan to take a position as a maid for the wealthy heiress, Maud Lilley. The plan is for Gentleman to make Miss Lilley fall in love with him and to escape her confinement of Briar House.  Only to have her committed to the madhouse and keep the fortune for himself.

Susan’s role is to befriend and gain the trust of Maud, to help gentleman with his plans, however the two women forge an unlikely friendship which later evolves to physical attraction. Susan soon realises that she has fallen in love with Maud and regrets the deal she has struck.

We have a name for your disease. We call it a hyper-aesthetic one. You have been encouraged to over-indulge yourself in literature; and have inflamed your organs of fancy.”

I have wanted to read this book for such a long time but have been put off by the sheer size of the novel (a whopping 547 pages) and the text is quite small. This was short-listed for The Man Booker and The Orange prize and is  listed in the Boxall’s 1001 books to read before you die.

This book is told in 3 mains sections from two POV’s starting from Susan to Maud and then back again, I really enjoyed this because every time I thought I had the story sussed, it twisted again *stares with mouth open* WTF! and it was like this all through the book, it just had me constantly guessing.

My favourite parts of the book were the scenes in the Madhouse which gives you a glimpse of how people were treated and how little they really knew about mental health. I felt that the lesbian scenes were written tastefully and felt very natural.

I liked Susan’s character as she was to most genuine and down to earth, possibly due to her upbringing, the writing for her was very simple.  I found Maud to be a very emotional character and almost a bit too much to bear, especially with the constant blushing and colouring up.

There were parts in the book that was very slow and then would start gaining in pace to only lose momentum, I felt that the book could have been shorter as the Second part was re told from Maud’s point of view. I had to re read some of the passages in this book as I felt I needed to devour the book slowly and if I read it too fast I was going to miss part of a plot as it kept changing.

The book was a dark historical fiction filled with villains, thieves, love, lies and betrayal and makes you beleive that no-one can be trusted.

I will be looking to read tipping the velvet in the near future.